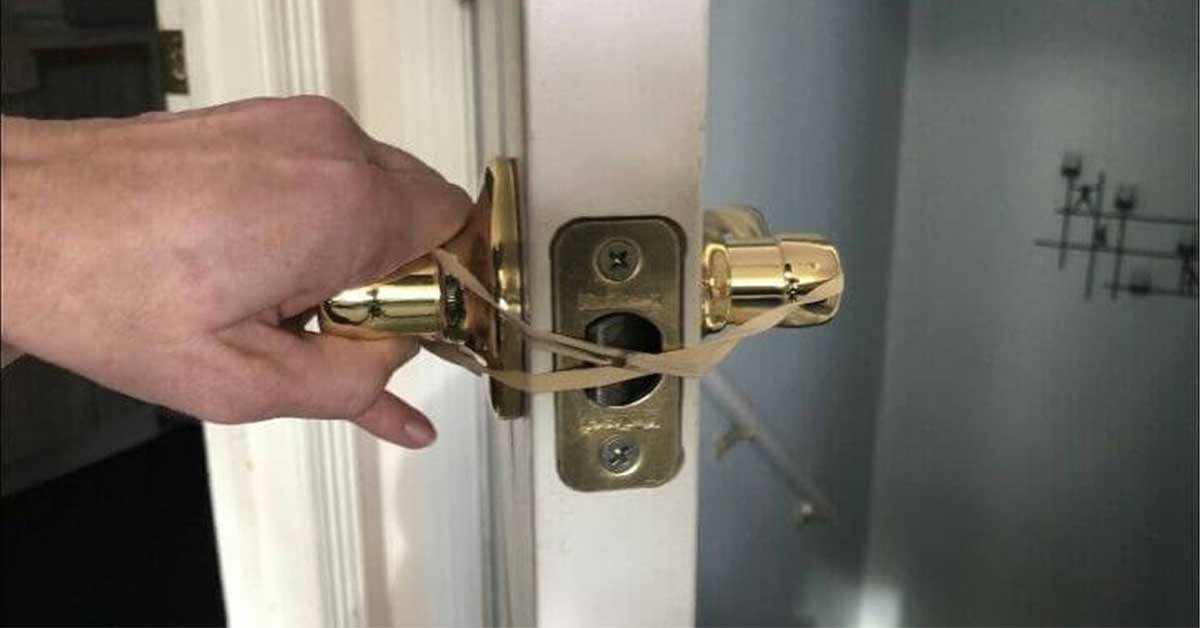 Some of us may be wondering about the topic “why put rubber bands on doorknobs?”. We may be thinking about why we need to wrap a rubber band on the doorknob when home alone. There may be different thoughts and also the purposes moreover I like to give diverse perspectives on this rubber band around door lock trick.

Is there really a “rubber bands over door knobs hack” that claims “always place a rubber band on the doorknob when alone.”?

Did you have ever heard about the rubber band on the door knob hack before?

Do you pass the door coming in and out with your hands full? If yes, then you might get an idea of how could this be useful in such situations.

The trick flourished in the online platform displaying: “ put rubber bands over door knobs when alone, really! Isn’t it weird? Let’s figure out how this works ?“

I was having some trouble myself with why should you put a rubber band on the doorknob when alone, anywhere the actual origin is closer to “when passing the door coming in and out with hands full“, which actually makes sense instead of the clickbait titles.

However, the post that said: “Put Rubber Bands Over Your Door Knobs If Alone, Here’s Why.” ended up explaining nothing about wrapping rubber bands over doorknobs.

Besides this, good housekeeping in a bog posted where it suggests Loop a rubber band around a doorknob as a smart way to use rubber bands.

What is the Actual Tip or Hack?

The trick, “rubber bands over door knobs” is found to offer diverse benefits behind all the hypocritical photos.

One simple moving tip is that put the rubber band making it an “x” shape stretching it over the doorknobs which prevent it from latching every time you carry a box out or inside the door. Especially coming in and out with hands full of groceries or other kinds of stuff, it is found convenient and effective.

And at the time when you prefer to enter your home sneaky without disturbing others, opening the door with the assistance of a simple rubber band will lessen the slamming noise.

It’s very simple and easy that anyone can do to avoid the loud and annoying door-slamming noise.

Besides this, hanging or wrapping a rubber band around the door lock also can create an easy way to identify a specific door under a few cases.

Until then, the rubber bands trick possibly will make your work easy and convenient.

But wait There’s Something More

Here’s the sick thing it means.

If you spot a rubber band on your front door handle don’t touch it.

When you return home after being at work or out running errands. You expect everything to look the same as it did when you left. But, you might come home and find the newspaper on your steps or even a flyer for a new Chinese restaurant.

You might find a package on your steps that’s been delivered while you were gone, there is one thing that you never want to find on your front door.

If you spot a rubber band on your front door handle, don’t touch it I’ll tell you why in just a moment.

It all started back in May 2016, a Texas woman named Kim Cernagliaro was home alone and she heard somebody knocking on her front door. She says, “it really wasn’t knocking, it was more like a pounding.”

Since she wasn’t expecting anybody, she did not get up to answer the door. When Kim was home alone, she chose not to answer. She never felt safe opening the door to strangers when she was at home by herself. As this pounding continued, “Kim quietly got up and looked out her stained glass window.”

She chose that window because the person banging on the door wouldn’t be able to see her there. When she looked out the window she saw a man standing at the door, She sat quietly waiting for the man to leave.

After the pounding stopped, she waited about 30 minutes to open the door. she expected to see a brochure or maybe a bible pamphlet there. Instead, she found a rubber band fastened around her door handle.

She was a bit unsettled by what she found, so she decided to contact the police to see if they’d heard anything about people finding elastic bands on their door handles. And what the sheriff told her was shocking!! The sheriff’s office didn’t want to talk about it over the phone instead they sent somebody to her house.

When they arrived the officer told her, “this has been happening all over her town, when you unlatch the door, the rubber band will prop the latch open and it makes it possible for the criminals to push their way through the door.”

When you peek to see who’s inside, “if the latch is held open by the elastic band” you wouldn’t be able to push the door closed to save yourself in your home well.

When Kim heard this, she was terrified!! she was also thankful that she chose not to open that door.

She created a post as a warning to her friends and family members but she never expected the post to go viral.

Just a week after creating the post, though it received over 124 comments. And it was shared over 236 thousand times. People from all over the country were sharing the post so that they could warn others of the danger.

in Kim’s post, she mentioned that parents should also warn their children about this incident.

Now It’s Up To You

If you were asked “do you think it’s a good idea to wrap a rubber band around the door lock” what would your answer be?

So, I am going to say this is one tip I can personally validate as just weird enough to work behind all the reports and claims.