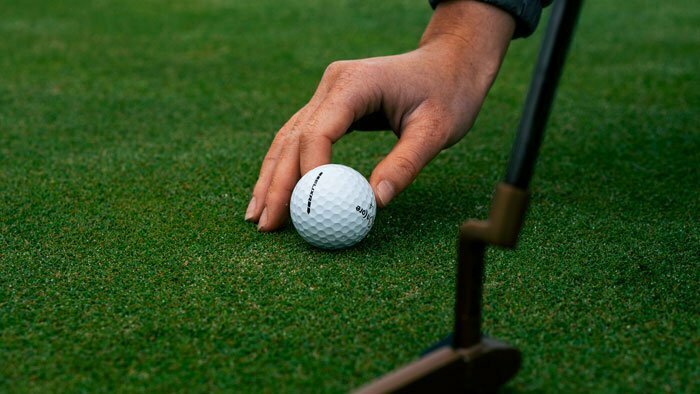 Well, there are all kinds of balls used in sports, with different sizes, shapes, and designs, depending on the sport’s needs and history. But there’s something especially weird about golf balls: which is their dimples.

There are more than 300 dimples on a standard golf ball, and they’re there for more than just aesthetics.

So why do golf balls have dimples on them? Does that make any sense about this fact?

Let’s figure it out with us.

Actual Science Behind This

Dimpled golf balls can fly almost twice as far as they would if they were smooth.

In the mid-19th century, players noticed that old scratched-up golf balls flew farther than new, polished spheres. So they started carving grooves into their golf balls to make them fly better.

By 1930, after years of trial and error testing, the golf ball had evolved into the familiar dimpled shape we know today. It might seem kind of strange that a rough surface would make golf balls fly better, and at the time, they didn’t know why it worked. They just knew that it did.

But these days, we know the dimples work because of a trade-off: increasing one type of air resistance leads to a huge decrease in another.

There are two main kinds of air resistance:

But it also affects the second kind of air resistance: pressure drag. As the ball flies, it pushes air out of the way, creating a wake — a cone-shaped pocket of low pressure behind the ball, which sucks it backward and slows it down.

But if you turn your hand sideways, the wake becomes much smaller, and your hand passes through the water much more easily.

In a golf ball, dimples reduce the size of the wake by creating a layer of what’s called turbulent flow. The uneven surface messes up the smooth path of air around the ball, making it much harder for the wake to form into a clean cone. With its smaller wake, a dimpled golf ball doesn’t get sucked backward as much, so it flies farther.

So, golf balls have dimples to mix up the air around the ball causing the wake to collapse more quickly, which allows the ball to fly faster for longer.

Of course, culture is a big part of the equation too.

Tennis balls get this effect by being fuzzy and Footballs would do better with dimples but have to settle for laces.

So that’s the reason why do golf balls have 336 dimples and yeah it makes sense to have them.

Lastly, this design has been around for over 150 years but they didn’t always look this way for the mid-1800s golf balls were smooth but they didn’t fly very far as the dimpled golf ball can travel nearly twice as far.

The trick is how the ball interacts with the air invisible when in flight air warps over the surface which lowers the air pressure behind the ball.

Which pulls against it slowing the ball down the dimples reduce this effect air must move along each tuple which creates tiny currents that change the air around the ball. The currents direct their foot closer to the surface which reduces the size of those two pressure zone this slashes the pole against the ball in half so the ball can fly about twice as far generally a golf ball has between 300 to 500 degrees.

But there is no limit to how many you need to have. The one thing in golf that stays the same is hitting the ball straight down the fairway is never an easy feat.